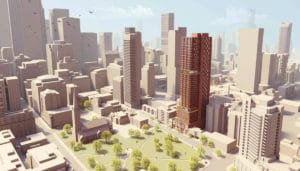 110 Adelaide Street East is a condo in Toronto, expected to have modern-designed suites that fit anyone’s lifestyle. The condominium’s architectural design is separated into 3 phases: a 4-storey podium that holds retail and office spaces; a 5-metre setback that ranges from level 5 to 9; and from level 10 to 42 are 10-metre setbacks that separate the mid-portion of the tower from the rest of the building. These setbacks will add dimension to the tower, making it stand out in the neighbourhood. The units offered by 110 Adelaide Street East is a mixture of 16 studio units, 68 one-bedroom units, 75 one-bedroom plus den units, 70 two-bedroom units, 29 two-bedroom plus den units, and 29 three-bedroom units. The 4-storey podium will be a mixture of retail spaces on the ground floor and office spaces from the 2nd to the 4th floor. Amenities can be found on the 11th and 29th floor and will have outdoor terraces.

110 Adelaide Street East is only 4 minutes to Queen and King subway station and multiple tram stops. Just 6 minutes away is CF Toronto Eaton Centre. Surrounding the tower are restaurants like Domino’s Pizza, McDonald’s Terroni, and Pearl Diver. 110 Adelaide Street East is only a few steps from George Brown College – St. James Campus, and other schools nearby are Elementary School Gabrielle-Roy, Ryerson University, and the University of Toronto. Just across the street is St. James Park.

663-665 King Street West Condos
Toronto
TBA
Simplifying Your New Home Search!
Material on this page is not intended to conflict with buyers/sellers under contract with any brokerage. All information on this site is obtained through online sources and may not be reliable. If there are any changes you’d like us to make on any pages or if you are the owner of a development and would like us to remove your listing, Condowizard & Its owners will comply right away. We represent you, the purchaser – not the builder. Tal Shelef – Sales Representatives @ Cloud Realty.
Navigation
Follow Us
Facebook
Twitter
Youtube
Instagram
Pinterest-p
Subscribe to our newsletter
© 2021 CondoWizard. All rights reserved.