Back to Home
Mississauga 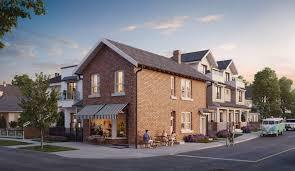 Century House is a new freehold project developed in Vancouver by Domus Homes. It will have a total of 4 units offering 1 to 3-bedrooms with unit sizes ranging from 860 sq. ft. to 1,534 sq. ft. Century House is currently under construction at E 34th Ave & Nanaimo St, Vancouver, BC and will be completed in March 2021.

Century House is in the route of two bus stations that are coming from E 33rd Ave, so residents can easily take the bus when stepping outside the front door. Century House is close to two train stations: around 10 minutes to Nanaimo SkyTrains and around 12 minutes to 29th Avenue SkyTrain. Amenities like restaurants, shops, schools, and parks can be easily reached by car.

663-665 King Street West Condos
Mississauga
Domus Homes
Simplifying Your New Home Search!
Material on this page is not intended to conflict with buyers/sellers under contract with any brokerage. All information on this site is obtained through online sources and may not be reliable. If there are any changes you’d like us to make on any pages or if you are the owner of a development and would like us to remove your listing, Condowizard & Its owners will comply right away. We represent you, the purchaser – not the builder. Tal Shelef – Sales Representatives @ Cloud Realty.
Navigation
Follow Us
Facebook
Twitter
Youtube
Instagram
Pinterest-p
Subscribe to our newsletter
© 2021 CondoWizard. All rights reserved.