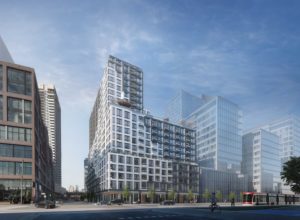 With close proximity to waterfront trails, parks, and the downtown core of Toronto, Empire Quay House is an ideal condo residence for families and young professionals in Toronto, who desire to live in a community that has the conveniences of living in the very heart of a thriving urban centre. The 2nd, 5th, 11th, 12th, 20th, and 21st floors will feature smooth painted ceilings, 9” and 10” in height. Other features in the units include a modern kitchen that offers a 24” stainless steel smooth electric cooktop, a 24” panelled refrigerator with a bottom-mount freezer, and more. Empire Quay House will also feature indoor amenities like a 24-hour concierge, a fully-equipped fitness centre, a yoga room, a WiFi-enabled study room with a communal table, and more. The outdoor amenities include an outdoor terrace that has a gated pet area, a BBQ dining area, and group seating.

Empire Quay House is right next to George Brown College and is only a 4-minute walk to George Brown College – Waterfront Campus and a 12-minute walk to the St. James Campus. Other major universities like Ryerson University and the University of Toronto – St. George Campus are just 10 minutes away. Residents from the Empire Quay House can shop, dine, and run errands at CF Toronto Eaton Centre, which is 8 minutes from the condominium. Grocery stores are just steps away from the site. Commuting from Empire Quay House is very convenient due to the many bus stops right outside and residents can reach Union Station in just 12 minutes. Also, parks accessible from Empire Quay House are Sugar Beach Park, Sugar Beach, and Sherbourne Common.

663-665 King Street West Condos
Toronto
Empire
Simplifying Your New Home Search!
Material on this page is not intended to conflict with buyers/sellers under contract with any brokerage. All information on this site is obtained through online sources and may not be reliable. If there are any changes you’d like us to make on any pages or if you are the owner of a development and would like us to remove your listing, Condowizard & Its owners will comply right away. We represent you, the purchaser – not the builder. Tal Shelef – Sales Representatives @ Cloud Realty.
Navigation
Follow Us
Facebook
Twitter
Youtube
Instagram
Pinterest-p
Subscribe to our newsletter
© 2021 CondoWizard. All rights reserved.