Back to Home
North York 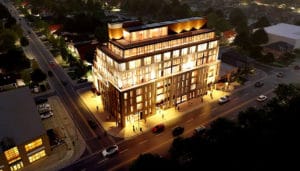 Castlefield Design District is a proposed condo development in North York by OldStonehenge coming soon to Eglinton West, Toronto. This exclusive development is set for completion in 2022 and features a 9-storey boutique condo with 101 residential suits. The development is set in a central location in Eglinton west where it is within reach of urban amenities and public transportation options.

The central location of 2166 Eglinton Ave West is an ideal place to invest in. Investors will find the location a convenient place to live in because of its proximity to countless amenities that include eateries right at the development’s doorstep, quick access to transit stops and subway stations, and over a dozen retails in North Fairbank which is just adjacent to the development. There is no shortage of amenities within reach for the residents of Castlefield Design District Condos.

There are also quite a few schools in the vicinity of the development such as Fairbank Memorial Community School, Fairbank Public School, and Charles E. Webster Junior Public School that is convenient for the students.

There are also a few parks that the residents can enjoy in the neighborhood. Parks like Bert Robinson Park, Charles Caccia Park, and Haverson Park are situated near the development.

Situated a mere 10-minute drive away from the development is TTC’s Line 1 Eglinton West Station. Residents can easily commute just about anywhere in and around the city and Downtown Toronto. The area is also serviced by bus stops situated along Eglinton Ave West.

663-665 King Street West Condos
North York
OldStonehenge
Simplifying Your New Home Search!
Material on this page is not intended to conflict with buyers/sellers under contract with any brokerage. All information on this site is obtained through online sources and may not be reliable. If there are any changes you’d like us to make on any pages or if you are the owner of a development and would like us to remove your listing, Condowizard & Its owners will comply right away. We represent you, the purchaser – not the builder. Tal Shelef – Sales Representatives @ Cloud Realty.
Navigation
Follow Us
Facebook
Twitter
Youtube
Instagram
Pinterest-p
Subscribe to our newsletter
© 2021 CondoWizard. All rights reserved.